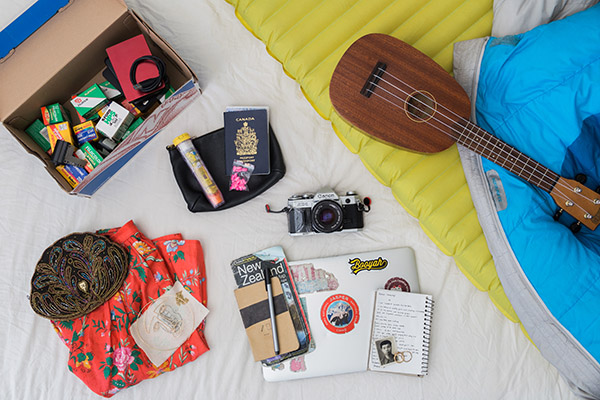 “I never had the opportunity to meet them or hear their stories directly, so that was a question that was always going to be left unanswered,” Isomura tells Nikkei Voice in an interview.

From this question stemmed The Suitcase Project, a photography exhibit running at the Nikkei National Museum in Burnaby from June 16 to Sept. 2, where over 80 Yonseis and Goseis share what they would pack if they were forcibly removed from their homes today.

yongā · jenerēshon | there was a period a couple months ago when i was mad brainstorming names for the exhibit. #thesuitcaseproject was a placeholder name i used when i applied for my first grant from @jcyoungleaders a year ago, but it's somehow always stuck. carolyn, @kendallyama, @ritualipstic and i made a long list of potential names, including funny (but so honest) ones like #mindoftheyonsei. i later asked @jlachman381 for a translation of "younger generations" into japanese because sometimes that language has terminology for the most unexpected things. his translator came up with "yongājenerēshon," which i can't help but laugh every time i say this in my head. in the end, @an_xie_te affirmed the running title but if you haven't noticed, i am also using #youngsei as a secondary hashtag. this is partly because these stories are reflecting those of the younger generations, which encompasses yonsei, gosei and #futuresei. 〰️ anyway, this photo is the cover of the @bulletin_geppo this month and is also a large feature of the exhibit. we are ONE WEEK away from opening so please come out to @nikkeimuseum next saturday (2 p.m.) if you're free. ?? · · · · · · · · · #japanesecanadian #nikkei #yonsei #makeportraits #justgoshoot #gosei #yvr #vancouverphotographer #burnaby #canadianhistory #bcart #vanart #asiancanadian #proudlyasiancanadian #vancouverisawesome #vansun360

Growing up with little involvement in the Japanese Canadian community, and understanding how spread out and diluted the community is over Canada as a result of internment, Isomura says she slowly built up a connection to the community volunteering and now working at the Nikkei National Museum.

She also knew very few young Japanese Canadians and was unsure how much they knew or would be interested about their family history.

“I grew up not really knowing about the history and my own family’s experiences, so I had no idea what other people’s backgrounds were,” says Isomura.

When she put out the call for participants, she was skeptical others would want to participate, and set a goal of 30 people.

To her surprise, over 80 people reached out from Lower Mainland, Vancouver Island and Western Washington. Many others from across Canada expressed their interest, but Isomura was limited to photographing people she could reach by driving.

Isomura only set one parameter for participants, that they were fourth or fifth generation Japanese Canadian. As a result, people ranging from infants to 50 years old are featured in this exhibit.

To photograph subjects, Isomura would give 24 to 48 hours notice, and little information on what they should pack, similar to Japanese Canadians’ experience at the time. She photographed participants with their packed bags in their homes, and then interviewed them about what they took and why.

Isomura says these photography sessions turned into conversations about contemporary issues, political and personal, about discrimination and the displacement of minority groups across the globe.

“The past is still very present,” says Isomura. “What Japanese Canadians and Americans went through in 1940s is still happening today, just in other communities and in ways that look different than how the government went about it 75 years ago.”

“however much or little we know about [this history], we have that kind of feeling in our gut that exists where we know that that can happen. we have that personal connection to institutionalized racism where we’ve seen the effects of that.” -l.f. (28), excerpt #3 from my submission to @ricepapermag (link in bio). #thesuitcaseproject #youngsei · · · · · #japanesecanadian #nikkei #yonsei #makeportraits #justgoshoot #gosei #yvr #vancouverphotographer #burnaby #canadianhistory #bcart #vanart #asiancanadian #proudlyasiancanadian

Brendan Takata, a Yonsei in his 30s, living in Vancouver participated in the project after hearing about it from a friend. It was not an experience he had ever thought about, and hoped it could be a way to better understand his father and grandparents.

Takata says he packed items like clothing that were gifts and were sentimental to him, along with essentials like canned food and favourite books and movies.

“My girlfriend started getting mad at me, ‘You can’t just pack sentimental stuff,’ she said. ‘What if it’s cold? What if you need food?’” says Takata. “I started thinking about it in way—I don’t know if my grandparents felt this way—of trying to find a balance of bringing things that meant something to you, but also would I be able to come back eventually?”

After finishing, he realized he didn’t pack boots, and thought of his grandfather, who was sent to Sandon to work on a road camp at 13 years old.

Taking part in the project made Takata think of how internment must have affected his dad growing up, unable to celebrate his own culture. He compares it to his own childhood, where now everyone loves Japanese food and pop culture. He also marvels at his grandparents’ ability to forgive. Being mixed race, he says he never felt any resentment from his grandparents.

“I think to their credit, they did a pretty good job with their kids. Not sort of saddling them with any guilt, or making them feel they should be a certain way, even then they’ve been through some terrible stuff,” he says. “I gained a greater respect for my grandparents and my great grandparents and how they have been able to recover.” 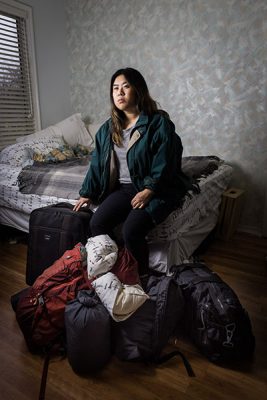 The Suitcase Project photography exhibit will be at the Nikkei National Museum June 16 to Sept. 2. Photo courtesy: Kayla Isomura.

Laura Fukumoto, a Yonsei in her 20s, who grew up in Whitby, ON, but now lives in Vancouver, was already familiar with the internment story before taking part in this project. Involved in multiple projects involving Japanese Canadian history, including consulting on the play JAPANESE PROBLEM, this project still helped unearth stories she had never heard before from her grandmother.

Running around last minute, trying to choose the best photos to pack and what kind of jacket would be best for unknown weather conditions, she realized she hadn’t even thought about packing enough food for three days.

Fukumoto says her grandmother shared a story with her she had never before. After being evacuated and days of travel, many families had run out of food. When they arrived in Hastings Park, everyone was given a bologna sandwich with Wonder Bread, the first meal in 24 hours for many. It’s hard to think about these moments without getting upset or angry, explains Fukumoto.

“I think there’s kind of a simplification that happens in the re-telling,” she says. “It always ends with we’re here now, and everything is good. My generation, we don’t have any idea, we don’t have the ability to even imagine the depth of that tragedy.”

It’s a topic that is barely touched in school curriculum, she points out. This project is an opportunity for younger generations to better understand their own family history. As well, it brings together  younger generations that may have lost their connection to the community.

“It’s hard to imagine your whole family and whole community being exploded across the country,” she says. “Years later, and how many hundreds of thousands of kilometers, wherever else in the world, we’re meeting up and we’re all sort of circling around each other.”

“One of the things that I have been wanting to do in the last couple of years was thinking about doing photography projects that is more meaningful, maybe not even necessarily to me, but sort of in a broader sense,” says Isomura.

The Suitcase Project will be at the Nikkei National Museum June 16 to Sept. 2, 2018. Opening reception on Sat. June 16, along with various public programs. For more information visit: www.centre.nikkeiplace.org/exhibits/the-suitcase-project/