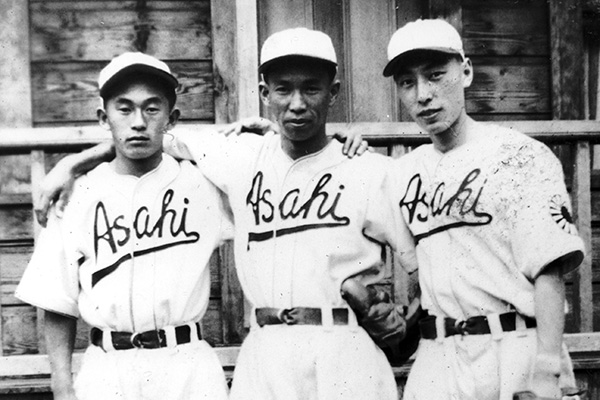 
Kaye Kaminishi, right, joined the Asahis when he was 16. He writes in ‘Asahi: A Legend in Baseball’, “It was an honour and I was proud to be involved.” Photo courtesy: NNM

The Vancouver Asahi has experienced a renaissance over the last few years.

Almost a century after the legendary baseball team made up of Japanese Canadians formed, the players received a film adaptation that reached a worldwide audience who now know their story.

With the success of several new books and a resurgence of interest in baseball, this was the perfect time for the Asahi to be honoured at the Sakura Gala said Japanese Canadian Cultural Centre president Gary Kawaguchi.

Accepting the award on behalf of the team is Kaye Kaminishi who joined the Asahi when he was 16.

“Kaye Kaminishi proudly represents the Asahi baseball legacy and the importance of it to the community and the development of young men like himself,” Kawaguchi told Nikkei Voice.

“He was very excited and honoured to represent the team, but is even more excited about the rebirth of the team after 70 years.”

From 1939 to 1940, Kaminishi played for the Asahi. He joined the team as a rookie and played at Powell Grounds in Vancouver.

One of his most memorable moments with the team, he recounts in Pat Adachi’s Asahi: A Legend in Baseball, was a hit where the left-fielder made an error giving him a chance to run home. Unfortunately, he stumbled resulting only in a two-base hit.

Kaminishi traveled with the team to exhibition games in Seattle and to location in B.C. like Chemainus and Woodfibre. The team often traveled by shrimpboat and he recalls getting seasick on the rough waters.

He currently resides in Kamloops and the award was presented to him in his home. A film of the event will be presented at the Sakura Gala this year.

Though his time with the Asahi was cut short by the war, the experience with them gave him an understanding of the sportsmanship and goodwill between the Japanese and hakujin players during and after.

This relationship is shown in films like The Vancouver Asahi in 2014 and in Sleeping Tigers released in 2003 by the National Film Board of Canada.

The players were able to overcome their racial differences for the love of the game. It’s this spirit of the team that saw its members inducted into the Canadian Baseball Hall of Fame, the BC Sports Hall of Fame, and designated as an Event of National historic Significance in 2008.

The Vancouver Asahi are the 10th honouree to receive the Sakura Gala Award following authors Joy Kogawa and Haruki Murakami who received the award the previous year.

The annual charitable event in Toronto brings the Japanese-Canadian community together and raises funds for the cultural centre’s Legacy Campaign.

The event also brings a number of surprises to attendees, but this year it brings into focus the ever-growing importance baseball is playing on the Canadian cultural landscape.

Leagues started by Japanese Canadians continue to play to this day and brings out players young and old to the baseball diamond. The impact baseball has had on various communities in Toronto has been enormous, and a special guest this year will be discussing the connection between Canada and Japan in this sport.

Paul Beeston, former Major League Baseball (MLB) and president of the Toronto Blue Jays, will be the gala’s guest speaker.

“We are thrilled to have Paul Beeston offer his thoughts on the role of the Asahi to our community, the development of baseball in Canada and the link between MLB and Nippon Professional Baseball that has produced so many Japanese stars playing in North America,” Kawaguchi said.

Frankly Speaking: Books about JCs that we all should read ‹ Nikkei Voice | The Japanese Canadian National Newspaper


[…] is when she attends the camp school created for evacuee children. One of her teachers is a former Vancouver Asahi named Kaz Katsumoto. He eventually becomes her uncle by marrying Aunt Sadie who also had become a […]


[…] her father.  She lived on Powell Street and the two would walk to the Powell Grounds to watch the Asahi […]