An artistic transformation through disaster and hope 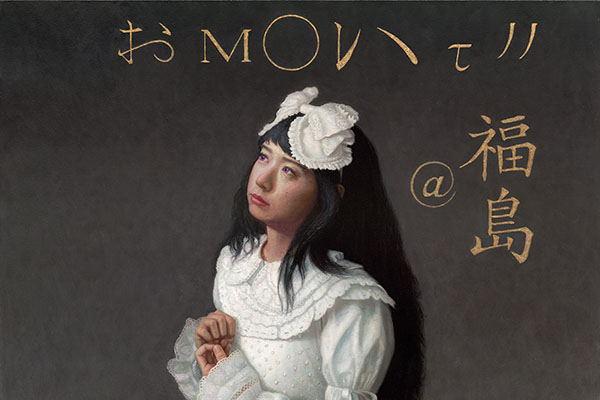 Artist Daisuke Takeya discusses his latest exhibition, ‘Breaking the Waves’ and its connection to disaster, recovery and remembrance of the 3.11 Tohoku disaster. Above a portrait of Alice from his ‘Fukushima NO ALICE‘ piece at the Christopher Cutt’s Gallery. Photo courtesy: Daisuke Takeya

Daisuke Takeya brushed his hand gingerly along the matte black frame of his latest installation work.

Taking a step back, he looked contemplatively at the massive altarpiece mounted on Christopher Cutts Gallery’s eggshell white wall. Unfolded, the spectacle takes up two-thirds of the space, complete with movable panels of nude paintings, neon lights, and resin encrusted soil and debris elevated a few feet off the hardwood floor.

“Should be okay,” he said nervously. “But the wall can break, you know.”

Earlier, the Toronto-based performance artist had carefully swung the two moving panels back and forth while deciphering his showcase, Breaking the Waves, at the Toronto west end gallery.  Unshaven and slightly haggard, he had spent the last five days assembling the exhibition and transporting artwork from his Scarborough studio.  Putting together the final touches before the official opening the next day, he expressed his concern for the magnitude of the altarpiece, which weighs over 1000 pounds.

Takeya, however, is no stranger to moving large-scale installation pieces. Four years ago, his God Loves Japan installation, a 14-foot tall structure modelled after a typical Japanese-style house battered by the 3.11 earthquake and tsunami disaster,  took up an entire section of the exhibition hall at the Museum of Contemporary Canadian Art, (MOCA).

Breaking the Waves, he says, is a continuation of that work — bringing narrative to the continuing recovery efforts in the aftermath of the Tohoku earthquake and commemorating the lives lost in the incident.

“I think narrative is quite important in my practice because I’m a painter,” Takeya says. “I think there’s some stories to tell and there’s something real [here] so it’s easier to get started.”

For the past five years Takeya has conducted numerous art projects, travelling exhibits, and workshops designed to aid locals in the Tohoku region, called the Daiichi Projects. The journey, he says, has transformed him from being an introspective painter working in the confines of his studio to a relief worker clearing debris in earthquake devastated zones. The experience has also led him to provide creative distractions and art workshops for the local children who have lost their houses, schools and playgrounds. 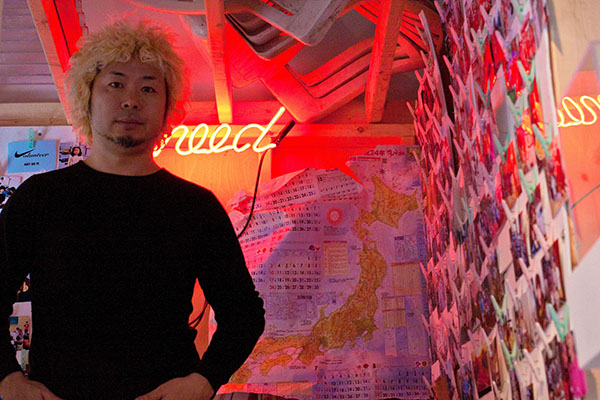 Daisuke Takeya in front of his ‘God Loves Japan’ exhibit at the Museum of Contemporary Art in 2012. Photo credit: JC Wen.

“The feeling I get when I go there, I think it’s better, much better,” he says. Having returned to various parts of Tohoku, year after year, he feels the population is on the mend, and more uplifted now than a few years ago. “I think the recovery, the reconstruction of the cityscape and the removals of debris have gone by and there’s no trace of how it was before. So every time I go back, it’s a new scenery, that’s good, but at the same time the memory is fading and I can sense that.”

The same transformation is evident in his signature large-scale landscape paintings called the Kara series that are also a part of the exhibition. In which the colour nuance and vastness of the sky are displayed prominently on the canvas, eclipsing the thin strip of cityscape below.

“The sky is big, so our civilization is small comparatively,” he explained the idea behind the juxtaposition.  “So whatever problems and whatever matters to you in your life or with your loved ones are almost pointless, or nothing, or minimal.”

‘Kara’, is a play on words of the Japanese kanji for sky, ‘sora,’ which can mean emptiness when pronounced the wrong way.

The latest addition to the Kara series is an idyllic portrait of the Ishinomaki Okawa Elementary School, where the lives of more than 80 pupils and teachers were swept away with the tsunami. The slow response of the school staff to evacuate the students attributed to the high death toll, according to a recent municipal court ruling.

Takeya has meticulously recreated the scenery to include a bright yellow patch of blooming sunflowers on the west side of the school. Yet, hidden on the opposite side, behind the vacant school building sits a gray block representing the shrine for the dead etched in the corner like an indelible watermark.

“I want to bring in the works to see the changes, the transformation that took place in my practice after the disaster by doing various different kinds of projects,” Takeya explains the meaning behind Breaking the Waves, a title he had borrowed from the 1996 film of the same name by Danish filmmaker Lars Von Trier. The film follows a psychologically troubled woman who becomes a martyr for her physically disabled husband by throwing herself into sexual promiscuity. The latter recovered from his disability while the other sunk into the depth of irrevocable self-destruction.

“Recovery is part of the new waves. Things change. My practice, I have Kara series paintings, it’s sort of the style that defines me as an artist but then I’m doing different things, different projects and trying to reach out for society or social issues. So that’s like a new wave for me, so I’m breaking the waves.” 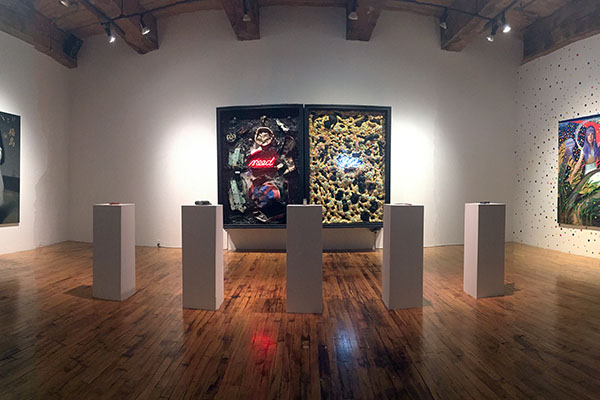 The outside panels of Daisuke Takeya’s massive 1000-pound altarpiece for his ‘Breaking the Waves’ exhibit. Photo courtesy: Daisuke Takeya.

As an extension from his previous Tohoku earthquake related installation at MOCA, the altarpiece also captures the expansion of his artistic range. On the exterior panels, Takeya has re-used the neon signs, “yes” and “need” from God Loves Japan. Here “need” is flashing red and surrounded by soil, water and debris he retrieved from Tohoku and coated with a layer of resin to resemble the muck covering the grounds of the tsunami-devastated areas. The adjacent panel is laden with Japanese toys he had painted black, and buried beneath hardened insulation foams adorned by dollops of coloured paint. It’s open to interpretation what the signs mean, he says, but they’ve survived both installations while other parts were lost.

“I wanted to make it an altarpiece because I’m interested in duality,” Takeya says.  “I think everything good has some bad and bad has good too, and everything has both sides.”

To contrast the material objects on the exterior panels, the inner side of the altarpiece contains a nude painting of Governor General’s Award winning performance artist, Istvan Kantor, shouting through a megaphone. Takeya has taken the liberty of placing Kantor, known for his disruptive, visceral and graphic art performances, within a barricade of wreckage as colloquial symbolism of a “disaster within a disaster”. To his right, a life-size painting of a naked young woman lies on her bed, exposed and vulnerable, with toys for little boys scattered all around her as well as the shoes from the other side of the panel floating in a circle.  In her hand she clutches the same postcard of a boat that has been partially buried by the soil on the outside panel.

“Maybe she got swallowed,” Takeya suggested, as he points to the middle painting showing nothing but a sea of white. “This is the tsunami coming, connecting these two, so they may be at different places and different times but they are connected somehow.” 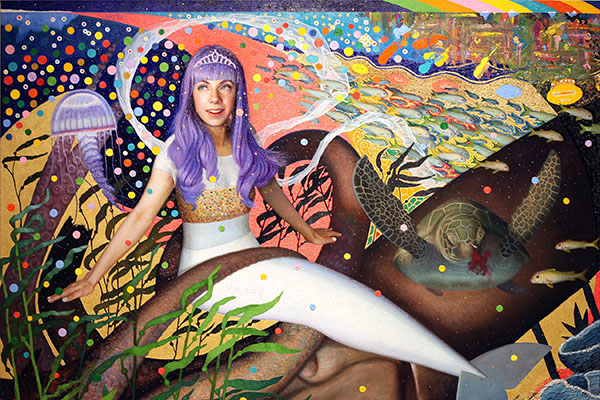 Among other works on display at the gallery, Takeya included a whimsical painting of electronic pop artist Clara Venice, as a purple-haired mermaid riding the world’s biggest squid. Its deliberately garish and vibrant backdrop distracts from a bleeding turtle in the foreground that references a famous YouTube video about plastic waste.

There is also a portrait of Alice from his Fukushima NO ALICE project, parodying Francisco Goya’s The White Duchess painting, looking wistfully onward as the black tsunami waves rises in the distance.

“I think artists need to be aware of the context – the culture of context – why is it so important?” Takeya says, as he ponders the idea of doing another series that can connect Toronto audience to the earthquake disaster.

“Obviously the artists who would have created the artwork, they are important for them, but not necessary for people in the communities. So I’m trying to make the issue relevant here but that’s not the only reason I’m doing this. I think I very much enjoy painting and creating art, exhibiting and communicating through artwork too, so somehow at the moment my practice is balanced.”

Breaking the Waves exhibit will run from Dec. 8 to Jan. 7 at the Christopher Cutts Gallery.